DVD IS NOW AVAILABLE direct from
The Ghosts In Our Machine website, at IndieCanent.com, and on Amazon.ca.

(Toronto – April 22, 2014) THE GHOSTS IN OUR MACHINE is a multi-award winning consciousness raising documentary that gently reveals one of the most haunting moral dilemmas of our modern world. While the provocative film BLACKFISH made waves for exposing the consequences of keeping orcas in captivity, GHOSTS illuminates the plight of many other animals rescued from and living within the machine of our modern world, from captive foxes to rescued dairy cows.

Award-winning filmmaker Liz Marshall directs this visually arresting documentary through the heart and lens of photojournalist Jo-Anne McArthur. The film follows Jo-Anne over the course of a year as she documents several animal stories in parts of Canada, the U.S. and in Europe. Each story and photograph is a window into global animal industries: Food; Fashion; Entertainment and Biomedical Research.

“In celebration of Earth Month, The Ghosts In Our Machine DVD was manufactured with animals and the environment in mind. In partnership with our Canadian distributor Avi Federgreen of Indiecan, we are setting an example by releasing a socially conscious documentary wrapped in environmental ‘ghost-free’ packaging: Recycled resin cases were sourced by Avi, and our cover insert is 60% tree-free paper donated to the project by my pals Woody Harrelson and Jeff Golfman, Founders of Step Forward Paper, the wheat based revolution paper company. The wheat paper inserts were printed with vegan ink and 100% green energy by local printer MPH. We set out with the intention of decreasing our animal and environmental footprint, and I dare say, we have increased our compassion footprint. #ForTheGhosts.” – Liz Marshall, Director, Producer, Writer 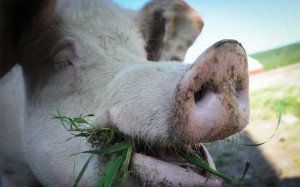 This is a masterful film. It should be essential viewing for everyone.
– James Cromwell, Actor

Directed and Written by Liz Marshall

About INDIECAN ENTERTAINMENT: INDIECAN ENTERTAINMENT focuses on independent, low-budget (less than $1.5 million) films.  As a distributor, Avi Federgreen follows the same principle that earned him his reputation as a filmmaker; bringing Canadians films they want to watch.  Aside from the traditional distribution route, INDIECAN leans heavily on digital delivery.  INDIECAN helps films find more opportunities with audiences through TV, Netflix, iTunes, websites, Facebook, Twitter, and other social media platforms.  INDIECAN’s vision is to encourage the viewing of independent films by Canadian audiences.