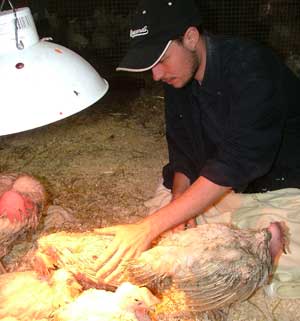 While not immediately recognizable, modern dairy farming is rooted in animal suffering. To produce milk for human consumption, dairy cows must repeatedly be artificially inseminated.  Their resulting calves are taken away almost immediately after birth. Female calves are typically kept on site as replacement heifers (although some may be sold to other dairy operations) and will be subjected to debudding (removal of the horn bud-producing cells through burning, gauging or caustic paste) or dehorning (removal of the horn with cutters that cut through sensitive tissue) and, in some cases, tail docking and the removal of extra-teats – mutilations all routinely performed without anesthetics or analgesics.  Newborn male calves are traditionally sold at auctions or direct to other producers to be raised as veal, although some may now be raised for beef. Regardless of their fate, the majority of dairy calves are never allowed to know their mothers, and are isolated from others, restricted from all social contact with their own kind. Once females reach sexual maturity, if they are like 75% of dairy cows in Canada, they will spend the rest of their lives confined to a shed, chained at the neck in a stall too small to even allow them to lie down comfortably, often for months at a time or even year round. Intensive genetic selection has altered today’s cows to such an extent that each now produce nearly 10 times their natural quantity of milk. The cost to the cows is high and many develop painful inflammations of the mammary glands (mastitis), osteoporosis, foot lesions, abscesses and arthritis.  While a cow’s natural lifespan is 25 years, today’s cows live just four or five years at which point their broken bodies are sold at auctions and taken to slaughter to be made into ground beef.

BACK TO DAIRY ALTERNATIVES