It is inspiring to be working with so many motivated community groups. Here is a thoughtful review of the film, with a video, that captures a recent screening event so well, composed by a very motivated organizer Georgia Animal Rights and Protection, with special guest Dr. Lori Marino of the The Kimmela Center for Animal Advocacy, Inc. By Running on Vegan: https://runningonvegan.com/2014/04/02/ghosts-in-our-machine-review/: 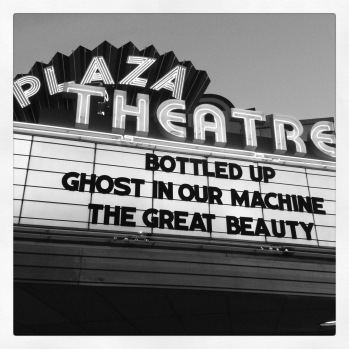 Re-published with permission by author: ALISON @ RUNNING ON VEGAN

Months of anticipation to see the award-winning documentary The Ghosts In Our Machine finally became a reality a few weeks ago. With the amazing help of Georgia Animal Rights and Protection (GARP), we hosted a special 2-day screening of the film at the Plaza Theatre in Atlanta. To add icing on the vegan cake, we held a Q&A after the movie and were honored to have Dr. Lori Marino join us. Lori is a neuroscientist and researcher in animal behavior and intelligence, and she was also interviewed in the film (you may also recognize her from being featured in the movie Blackfish). You can see the video of the Q&A below.Special thanks to Seth and Elena at VeganESP for filming the Q&A.

The Ghosts In Our Machine documented photographer Jo-Anne McArthur’s journey in creating awareness about animal exploitation through the making of her phenomenal book, We Animals. Director Liz Marshall did an incredible job in using Jo-Anne’s photographs to tell the compelling story of how animals are demoralized in every facet of their earthly existence. In the movie, Jo-Anne so eloquently says, “I don’t photograph animals; I photograph the predicament that animals are in because of humans.”

Jo-Anne explains in the beginning of the film that not many people are working for the animals, and through her photography, she wants to educate people so there won’t be future generations of these animals. Although I’m fully aware of how animals are treated in all industries – food, fashion, entertainment and research – it was quite a different experience to see how these sentient creatures live (or die) through McArthur’s lens. Jo-Anne exudes a special bond and sense of community with the animals. She says in the film, “You connect with them because you’re looking into their eyes and they’re looking into yours.” Her photographs so poignantly capture the old saying, “eyes are the windows to the soul.”

The director, Liz Marshall, did a nice job of balancing the movie in portraying both the exploitation of animals as well as the compassion that humans show toward non-human animals. McArthur goes to Farm Sanctuary during some parts of the movie, which shows happy animals that are being cared for and loved by humans. My favorite part was the scene where one piglet nodded off in the milk while drinking it before jumping up to run over to the other piglets laying in a big pile with one another – absolutely adorable!

The Ghosts In Our Machine reminded me why I am an animal rights advocate and why I fight every day for the magnificent creatures that share this earth with us. This must-see documentary was incredibly moving and powerful, and it will open your eyes to how just one person can be such an unbelievable change-maker for animals.