Bertha BRITDOC Connect Fund has announced its June 2014 Grantees, and The Ghosts In Our Machine is one of eight chosen films from around the world.

Films have inspired people to engage and to act. They have led to changes in law, policy and practice…

The Bertha BRITDOC Connect Fund, a joint initiative between Bertha Foundation and BRITDOC, is the first European-based outreach and engagement fund. The fund supports smart, strategic outreach campaigns for ambitious independent documentary films with a social issue at their core; films which have the ability to achieve real change on a local, regional or global level.

“Increasingly, we see that documentaries spur and heighten social movements. Through our #FortheGhosts Community Screenings initiative, THE GHOSTS IN OUR MACHINE is available as a consciousness-raising tool, to gently remove people’s blinders, to facilitate new perspectives and spark important dialogue about the pervasive use of animals in today’s industrialized consumer world.  Change is afoot, there is a new conversation about our moral obligation and relationship to nonhuman animals, and THE GHOSTS IN OUR MACHINE is helping to pave the way. My companies Community Screenings campaign launched in February of 2014, we are distributing upwards of 100 unique screening events around the world. Thanks to the tremendous leverage, support and expertise of the BRITDOC Foundation, our limited efforts to distribute the film and to measure its impact in the real world will be greatly enhanced. I am honoured to receive BRITDOC support towards the LizMars’ Community Screenings initiative for THE GHOSTS IN OUR MACHINE.”

Learn about the campaign here. 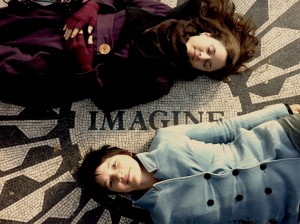