Hot off the Press with Photographer Jo-Anne McArthur

We are excited to share a new interview with photographer and main subject of THE GHOSTS IN OUR MACHINE Jo-Anne McArthur of We Animals. The interview focuses on her work with Toronto Pig Save and in particular the abuses of the meat industry.

For the full article from Laika Magazine click here

“Why did you feel it was important to be there on those freezing afternoons in Toronto to photograph the transport trucks?
It’s in extremes of weather that the pigs suffer most. The pigs are acclimatized to the indoors until they’re sent to slaughter, so the cold is a big change for them and they don’t have much hair to keep them warm. By the time they’ve spent hours in those transports in extreme weather, many are huddled on the floor, unable to move or respond. Some are dead. When I’m there to witness and document, I can’t help but put myself in their position. There I am, outside with cold feet and a cold nose, but they are bare-skinned and exposed to the wind rushing through the transport for long stretches of time. Their pain is crippling. Their forthcoming deaths are bad enough, but this as a prelude? It’s shameful. Needless deaths and needless suffering. I go to witness, to document, and share what I’ve learned.

What reactions have you been met with?
When we’re at Toronto Pig Save vigils, we’re met with extremes of opinion, to be sure. Some honk, wave, give thumbs up and enthusiastic support for us as we stand vigil on what has come to be known as “Pig Island”. Others make sure we see their middle finger or let us know with much originality that they love bacon. The trucks started detouring, or not going into the left-turning lane so that we couldn’t document the inside of their trucks. For the most part though, there haven’t been many efforts to censor. Mind you, the police get called fairly regularly but there’s not much they can do except tell us to obey the rules of the road. Toronto Pig Save takes a Gandhian approach to protesting; this is a peaceful movement and a pro-labour movement as well. We’re not there to anger or antagonize anyone, we’re there to open people’s eyes about the pig slaughterhouse in the neighbourhood, where 6000 pigs a day are killed. We’re there for the pigs and we’re there to show an alternative to treating animals this way.” 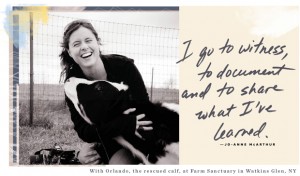