Where Did You Come From?

Around 3 years ago, on what would be my father’s last visit to our house, he was sitting in the living room, petting our dog Betty and looking deeply into her eyes. I heard him ask in a very soft voice, “Where did you come from?” He had Alzheimer’s disease and it would have been easy for someone to think that he had simply forgotten meeting her before. But I heard the wonder in his voice, and to me, it was more of an acknowledgement of the beauty that he was gazing at, the connection he was making with her, the same amazement that he had probably felt as a young child when he was around animals. The amazement that most, if not all, children feel for animals before their eyes start to close and these sentient beings become others – ghosts. 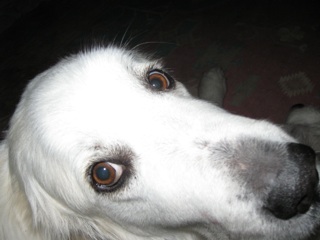 Recently, on the FB wall of TGIOM, Liz Marshall posted “I am looking for a succinct quote that sums up a very common social phenomenon: As most people grow up, we lose an innate sense of wonder and connection to animals. But, it seems that animal rights people do not forget.” I immediately thought about my dad and Betty. He was not an animal rights person but he did love animals. Is the childlike wonder restored back to people who lost it growing up but are now in their twilight years – a time when they begin to feel vulnerable again and start to really consider issues of life and mortality? Have animal rights people really not forgotten the sense of wonder as they grew up, or, is it that they have had it reawakened because they allowed themselves to be vulnerable – open, sensitive, unguarded.

I have been a vegan for 23 years, but I have been especially consumed this past year with the issue of why some people make connections while others don’t. From the time that I saw the first trailer for The Ghosts in our Machine, I have felt that this is the film that will touch people in a way that will allow for a deep and personal reflection. A film that will allow them to feel vulnerable but not threatened – a film that will plant a seed. For those who are already on the journey, it will inspire them to renew their commitment to activism. But for those who have never considered the issues, they will see as if their minds have been cleared and they’re now ready to join a larger consciousness. A consciousness that will help them to reconnect – and to look at ALL animals with wonder and love. Change can occur as simply as that – with an acknowledgement that we are surrounded by beauty. A recognition of the Ghosts, and a pledge to protect, not harm, these amazing creatures that we are so fortunate to have in our lives.