[TORONTO, ON] — [April 8th, 2014] – We are thrilled to announce that THE GHOSTS IN OUR MACHINE – INTERACTIVE is an Official Honoree in the Best Use Of Interactive Video category for “Online Film & Video” in the 18th Annual Webby Awards. Hailed as the “Internet’s highest honor” by The New York Times, The Webby Awards, presented by the International Academy of Digital Arts and Sciences (IADAS), is the leading international award honoring excellence on the Internet. The IADAS, which nominates and selects The Webby Award Winners, is comprised of web industry experts, including media mogul Arianna Huffington, Skype CEO Tony Bates, Mozilla CEO and Chair Mitchell Baker, Instagram co-founder Kevin Systrom, mobile-phone inventor Martin Cooper, and Creator of the Jif Steve Wilhite. 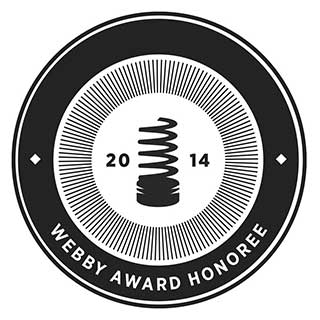 The Ghosts In Our Machine – Interactive is directed by Webby award winning interactive artists The Goggles, it is a cinematic online companion to the critically acclaimed documentary The Ghosts In Our Machine. Both the film and the interactive pose the question: Are animals property to be owned and used, or are they sentient beings deserving of rights? A full-screen click-through narrative experience follows animal rights photographer Jo-Anne McArthur through the pages of the photo-journal she is busily compiling throughout the film.

“The Ghosts In Our Machine – Interactive is setting the standard for innovation and creativity on the Internet,” said David-Michel Davies, Executive Director of The Webby Awards. “It is an incredible achievement to be selected among the best from the 12,000 entries we received this year.”

“When Liz Marshall (Director, Producer, Writer) and Nina Beveridge (Producer) asked us to help create the interactive component of the Ghosts story, we were both honoured and daunted by the task. As we saw it, the film documentary would have its own strong voice – something that was evident from the script, from Liz’s distinct vision of what she was after, and the beautiful visuals she had already captured. We weren’t interested in making a story that simply promoted or was just a mini-version of the film, and as we discovered, neither was Liz; this was an opportunity to do something different … In the footage, we saw that Jo-Anne McArthur (Photographer, Founder of We Animals) was creating a journal/photo book, and we asked to see some scanned images. What we found was a treasure trove of Jo’s passionate, emotional, involved writing, and a solution to our narrative voice. The writing is something that the film would be ill-equipped to deliver in a meaningful way – although many of the sentiments and opinions come through Jo’s actual voice and actions in the film – but yet was a perfect form for the voice in the interactive piece, turning weakness in one space into a strength in another, something that future cross-media projects should look to as a lesson … this process was illuminating, enlightening and creatively satisfying.”
– The Goggles, Interactive Directors

The 18th Annual Webby Awards received 12,000 entries from over 60 countries and all 50 states. Out of all the 12,000 entries submitted, fewer than 15% received this honor and were deemed an Official Honoree.

About The Webby Awards:

Hailed as the “Internet’s highest honor” by The New York Times, The Webby Awards is the leading international award honoring excellence on the Internet, including Websites, Interactive Advertising & Media, Online Film & Video, Mobile & Apps, and Social. Established in 1996, The Webby Awards received nearly 12,000 entries from all 50 states and over 60 countries worldwide this year. The Webby Awards is presented by the International Academy of Digital Arts and Sciences (IADAS). Sponsors and Partners of The Webby Awards include: Microsoft, Dell, Vitamin T, MailChimp, Engine Yard, Funny or Die, AdAge, Percolate, Mashable, Business Insider, Internet Week New York and Guardian News and Media.